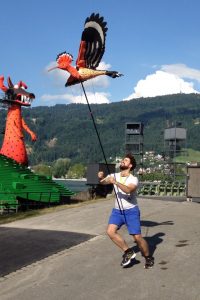 Sean grew up right next to the Norwich Puppet Theatre, this hugely impacted sean’s idea of how well the use of puppets can create inthralling theatre.

Since this introduction, Sean has sought out training from Bunraku masters in Japan, followed by the more contemporary style of the innovative puppet company BlindSummit theatre in the U.K.- Where Sean helped create, devise and star in ‘The Table’ 2011-2016. Sean has during this time help create, led workshops, been a puppet consulter for productions and drama schools in U.K, Europe and U.S.A.

A few stand out productions include;